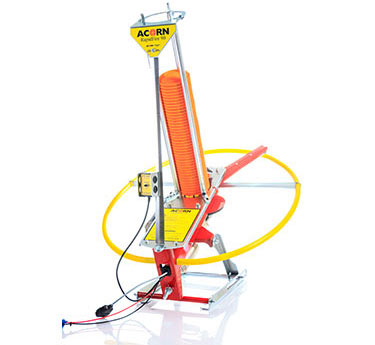 The Acorn RapidFire line of traps are the newest addition to the Acorn range offering a compact and lightweight solution for expert and casual shooters alike. Each element of the new design clay trap has been refined through innovation and ingenuity to provide a machine whose performance surpasses that of all other traps in this price range. The easily adjustable base can vary the clay target height from a low grass cutter to high teal.

The new RapidFire range was designed specifically around the concept of a multipurpose, cost-effective club trap which is equally viable as a personal or coaching trap. The result is a truly versatile and practical piece of equipment, which, unlike other traps in this price range, does not compromise on performance. This is achieved despite being the most compact and easily portable of any equivalently priced trap available! We at Acorn often find that the affordable ranges offered by other manufacturers are sub-par in terms of performance and durability, and we embarked on a mission to break this norm by developing a decent yet affordable machine, one that we would personally want ourselves and be proud to put our name on. The elegant engineering means the main spring is of the same power as that used on our main carousel model, giving the same awesome power that you would expect from an Acorn trap, but with much greater efficiency.

Each element of the machine was overhauled in our ground-up redesign of the automatic clay trap, with the resulting device far exceeding even our most optimistic expectations; a true triumph of British engineering!

Dubbed the “RapidFire” due to its exceptionally rapid cycle rate; a spectacular five clays can be airborne at the same time, with the trap being easily carried under one arm and effortlessly placed and operated hands-free using the included foot-release switch.

We’ve also developed a range of modular upgrades for the RapidFire series to give the option of a progressively increasing challenge, such as the T-Bar Turner Base which adds powered dual-axis variation (DTL/ABT), the RapidFire Radio Control System with custom pre-programmed release patterns, as well as the extended launch-arm & dedicated launch-plate which serve to significantly increase the launching range from 65m+ to an impressive 100m+ at the expense of a slightly less compact and marginally heavier machine, although an integrated trolley upgrade is also available.

These upgrades effectively turn the RapidFire into a trap which has the functionality and performance of our high-end models, but at a fraction of the cost, while being infinitely more practical.

With all these benefits combined with other handy features like the tool-free quick-release hopper - the RapidFire is simply the obvious choice for the discerning shooter or club owner who understands value and quality.   All Acorn traps are entirely designed and manufactured in the UK and come with 12 months warranty and lifetime technical support as standard.

QUALITY AND SAFETY BUILT IN AS STANDARD

With safety being top priority with all our clay pigeon traps, each machine is supplied with safety guards and a remote on/off disarm switch. All Acorn Clay Pigeon Traps comply with RoHS, WEEE Directive and CE regulation for safe use and environmental protection.

Ever considered buying a clay pigeon trap for personal use, perhaps jointly with a couple of pals? If so, there’s probably never been a better time to make that a reality.

Only a few years ago this would mean purchasing a manual trap, which most big clubs relied upon when I first began shooting clays.

Automatic traps gradually took over, with the majority aimed at larger club and shooting ground use, and this was great for the sport but most were large, heavy and expensive. Some makers concentrated efforts on lighter and less expensive but still high performance traps for smaller club and individual use, one of the first being Acorn Traps of Lowestoft.

I recently felt the need to obtain a trap to assist with my testing of guns and cartridges plus for informal fun with friends, and Acorn sprang to mind. This was partly because a small club local to me has used the brand for many years and it has provided good service. Acorn recently introduced a new and well priced model: “The new RapidFire range was designed specifically around the concept of a multipurpose, cost-effective club trap that is equally viable as a personal or coaching trap. The result is a truly versatile and practical piece of equipment, which, unlike other traps in this price range, does not compromise on performance.”

The new Acorn RapidFire 90 sounded ideal and so I tried one out to see if it was worth buying.

For my own personal use, several features were key: sound design and construction, portability, usability and performance. Plus it needed to be safe and affordable.

The new Acorn RapidFire 90 is just 15kg, an easy weight to handle (less than some old manual traps with their required operator seats). Needing to fit in the boot of my car, compactness was also important and even with the safety guard fitted the RapidFire 90 sat easily in my boot (with the magazine feed removed) with room for clays, cables and shooting kit. It will fit into a van or Land Rover type vehicle fully assembled. The folded steel base frame strips, with adjustment teeth in the lower portion, allow the hinged front bar, which supports the main trap body and mechanism, to be moved when necessary. This changes the  trap height setting from flat for travel, to low grass cutter clays and right on up to a steep teal. Finger-tightened screws pinch the trap in position, with its own weight ensuring the height setting is securely retained.

It was also important for me to be able to operate the trap single-handed when the need arises. The Acorn RapidFire 90 comes with a foot-operated switch, making it simple to release clays without your hands so they are ready to shoot.

I opted for the 50m-extension cable to facilitate all target types from DTL to crossers and incomers. I found the wide height setting provided an excellent variety of target options. Extras include wireless control options ranging from a simple button to programmed sequences and Skeet types at extra cost.

Quick set-up is important when time may be at a premium, and the magazine is easily carried to a suitable spot for the magazine to be fitted with simplicity. The angled brace incorporates a snug fit receptacle to retain the main operating switch, which is held in a visible position as an important safety consideration. Then you just load it with clays, connect the foot release to the lead, the connector to the trap body and plug it in.

The RapidFire 90 is power efficient with a top grade British motor and sealed gear drive unit fitted. A special clutch type bearing on the main spindle also holds the arm partially cocked from each firing, so that useful energy is retained. This makes for faster cycling with lower power consumption. I used a 12-volt motor battery for compactness and this will launch 250-plus clays. Larger car, leisure or power-pack batteries will run longer but are heavier to carry.

The steel base height adjustment strips have holes at each end for pegs to be inserted to prevent any rotation in use. However, I found the RapidFire 90 to be well balanced and, despite its low weight, did not throw itself around as much as some traps do. Settled in long grass the trap barely moved and only did so on firm soil where pegs were used to reduce this.

Within five minutes of arrival at a friendly farmer’s field, the first clays were in the air. The trap had been factory set for standard clays, but it is easily adjusted for midis and worked without a hitch right from the off. Several outings later, including small group sessions and as an extra stand at my local club, it has continued to feed and fire clays reliably without adjustment.

It has launched clays from grass cutters to teal and cycled reliably with no jams. The main spring has been adjusted to send targets around 70m, which is between DTL and ABT distances and fast enough for plenty of Sporting practice. The main spring, which is the same one used on their larger carousel models, can be wound up to send targets over 80m. A longer throwing arm option is also available if rocket-like targets are desired.

A nice feature of the RapidFire 90 gives rise to its name – it cycles fast for a smaller trap and the switch can be held down to keep clays coming. The maker has photographic evidence of five clays in the air before the first one lands. I didn’t wind it up enough to replicate this, but I launched three-clay on-report targets, which is fun with a semi-auto and good preparation for the Benelli Sp’Auto next year.

Safe operation has been given the same priority as with any larger traps from Acorn or other makers. It begins with the bright yellow plastic tube guard ring that provides a visual and physical barrier to help avoid contact with the powerful arm rotation. The sensibly positioned control box is a safety feature. It is not cocked and no clays are loaded until the battery is connected. Then the switch is moved to the ARM position, and targets are released  by the foot switch. To ensure safety in use, the trap must be disarmed when replenishing the magazine with clays by moving the control switch momentarily to the DISARM position.

When finally packing away, the launching arm will be in the disarmed position but still have some tension on the spring. Acorn advises reversing the polarity of the battery crocodile connectors when the disarm button is pressed. This will wind the arm fully forward with spring tension released for safe transport and storage: simple but effective.

The person releasing the targets can be with the shooter and not the trap, which avoids problems associated with providing adequate safety for the trapper. Otherwise you would require time, effort and equipment (like bales and corrugated iron sheets) to make sure those standing alongside the trap is safe. With the 50m cable, or wireless release, even direct incoming overhead targets can be safely set up as no trapper cover is now required. This is a good reason to consider electric auto  traps for club and small group shoots.

When shooting is complete, thoughtful design has ensured that dismounting the magazine takes moments and the height-adjusting frame folds down for transport in seconds without needing tools.

Acorn states that when redesigning this RapidFire 90, it’s final performance far exceeded their expectations and, from my experience using it, I can understand why. It is well thought out and constructed with metal parts electro-plated or painted for corrosion protection. Careful choice of materials and components has ensured strength, rigidity and balance without the need for over-engineering and excess weight. From previous engineering experience I appreciate the soundness of  the design and quality of components used.

The Parvalux-geared motor drive has an excellent reputation in industry so I have no doubt it will give long and reliable service for years to come. Acorn has made this on a modular system, so those who wish to add extra facilities such as the T-bar turner base with dual action lift and tilt for ABT/DTL can upgrade their existing trap.

Entirely designed and built in the UK and supplied with a 12-month warranty, plus  ongoing lifetime technical support, this trap, I believe, offers exceptional quality, performance and value being the special price of £495 (normally £585). And in case you are wondering: it did exactly what I needed, and I bought it.